I am getting the following error when creating a new event. When it happens, the scripting has typically already created  "... Argument--cluster.ctl" and has added an element to the Request Events cluster, but it is a boolean instead of a User Event Refnum. When it happens, I must delete that Boolean and the argument typdef file and try it again. It usually works that second time. Is there a way to track down the cause of that error? 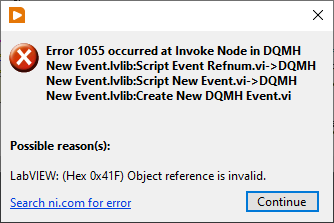 Re: Occasional error when creating events

It's likely a LabVIEW scripting bug, as it sounds like it only happens occasionally, and doesn't happen on a subsequent try of the same operation. If you had a reliable way to reproduce it that would be great.

The dummy Boolean control is there because there was a bug in scripting in LabVIEW 2015 (not sure if it's still present) where dropping a new User Event reference in the Request Events typedef would crash LabVIEW. The workaround was to drop a dummy control (to break the typedef), and then the new User Event reference could be scripted just fine with no crash.

Anyway, if you have a reliable way to reproduce the issue, let me know and I can debug further. Sample code and relevant LabVIEW version would help even more.

Re: Occasional error when creating events

Thanks for the quick response! I'll see if I can reproduce it reliably. Relevant LabVIEW version is 2020SP1, and I tend to see it happen more often when editing a module for a Real Time target such as the cRIO-9045.