Recommended Reading list from some of the smartest people I know


Interesting mental exercise. I'm going to do two things. First, semi-necro this thread. Second, take it a slightly different direction. Most post apocalyptic scenarios always focus on immediate survival and scrounging the left-overs of society. I never see them address many generations after the fall when all of the existing supplies have been depleted and/or failed. It's not sustainable because you've just lost 99% of your very specific tribal knowledge on how to actually make/repair things. I'm going to focus on rebuilding society with an in-depth DIY style handbooks on the following (not specific because I don't know ANY of this... case-in-point):

I'm realizing I just listed everything that happened during the industrial revolution and a few of the other big leaps in human society.

Side note: This was inspired by this image, which somehow surfaced in my mind while looking at this post.

In addition to Mark's reference fro mechanical engineers this stack is waiting to be added to our library. I have a target recovery tech level of about 1850. Going beyond that level requires teams of specialists working together. While I do have the books to help those teams get up to speed, beyond 1850 is more than a single person can handle alone.

1. With the current state of the agro business, many farmers have to buy new seed each year, are actually prohibited from saving aside seed for following years. So post-apoca might not be able to find the seeds for those crops.

2. Most modern medicines require major "foundries" to produce, the production of most of the current generation of antibiotics is a pretty closely held IP.

5. Glass making is actually a pretty old art, Egyptians were making pretty impressive glass objects 3000 years ago. The major issue is remembering how to make a 2100 degC heat, and sustain it while melting the silica.

9. Solar cell and transistor are pretty simplistic concepts, in the text book, basic physics sense, but producing the very pure materials that they are constructed from, not so much. Think tubes before transistors, there is a pretty interesting youtube video out there of a French hobbyist making his own tubes. They too require a certain level of technology (try working with tungsten, used in the filaments), but doable at the late 1800's level of technology.

11. "common plastics" are anything but common. See 2 above.   Rubber tires may have to be actually made from rubber, or at the very least, latex.

I would aim to trying to recreate the mid to late 1800's technology. Some more modern concepts like heavier than air flight are doable with that technology and the present day knowledge that they can be done. Our modern "civilization" is incredibly complex, from a technological point of view, with a lot of it dependent on an international world of trade (try finding the "rare earth" elements needed for so much of it in any one geographical location). Add to it that some things that were more available before the modern era (I'm thinking of "easily" mineable coal) that would be needed to drive a 1800's technology, are not so available now. Ditto on oil (needed for the plastics mentioned above as much as for fuel). In the 1800's it was oozing out of the ground not too far from where Ben lives! Until the realization that it could be refined into kerosene the major source of night time lighting oil was from Sperm whales, don't want to go back there (and they too are an over used and scarce "resource")

For the medicine, I was mainly thinking penicillin and things like using cowpox to vaccinate against smallpox. A fair number of vaccines were actually late 1800's and early 1900's (wiki timeline) . Viral vaccines might be another story, but honestly knocking out the bacterial problem would be huge.

Yeah, the last ones on the list were aimed pretty far into the future. That's why they were last in the list.

The major advancement (as far as I know) in medicine was a dentist which was available in the late 1800's.

Ginseng is used for a lot of cures but requires five years to harvest. We have two years worth in the ground now.

Yes Oil City is just north of my place and we are surrounded by gas wells every place you look. But since I do not think I would be able to do a good safe pump to compress natural gas, coal is my fuel target.

My g-daughters were in this gulley just yesterday to gather bones of a dead deer. And yes it is coal. Just steps from my front door.

Yes requires too much technology and they all wear out sooner or latter. Not a last solution.

Last year we started with almost all heirloom varieties of the stuff we grow. I am growing corn this year from seed I collected last year to make sure "Country Gentleman" is a type I can maintain. I also have many varieties of onions, leeks, chives, garlic,... so now I can share the bad pun.

As I was waking up yesterday and half awake I was thinking about the onion seeds and the chance of being able to produce more than 1000 onions. With over 1000 onions I could call myself

There were many advancements in medicine in the 1800's, chlorophorm, the germ theory of infection to name two. Vaccines are a good idea, some are fairly "primitive" like small pox (originally derived from cow-pox, hence the name Vaccine from  "Variolae vaccinae (smallpox of the cow)" (hey, have a daughter in medical school, picking up stuff through osmosis!)

What books would you recommend be acquired now that would help then?

Since Weird, AI and 3D is the new thing at NI, why not go for

Perhaps a book with the weird knob twisted all the way to 11 launching your mind into 4D hyperspace.

Should keep your mind busy both during and a long time after reading those two books.

Although, Not that I am smart, just curious...

I never did finish GEB but I have used the "adac" riddle many times with only one person ever getting the answer. The works of Gödel is something I think few fully integrate and for myself, speaks to a taboo subject.

My first reaction to the idea of having time to read books like those is that I suspect those seeking to thrive post-TETOWAWKI would not have much free time. I wrote about the idea of "free time" and levels of technology in this thread on MainStream Preppers. 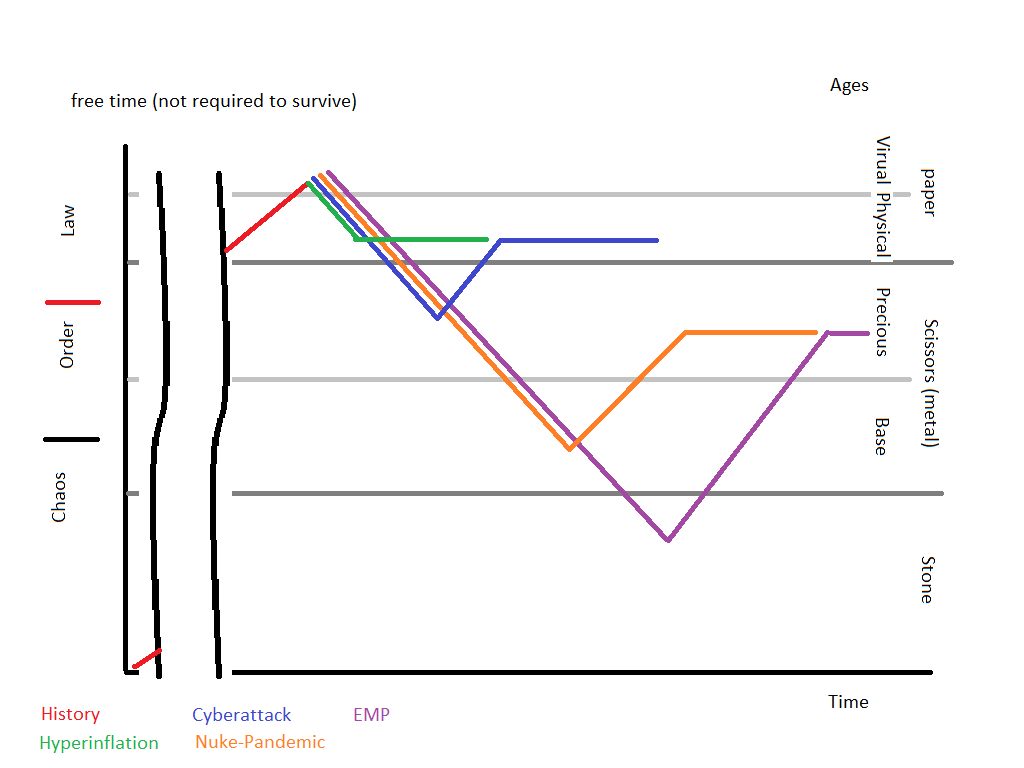 The post I linked above talks more about the idea I am trying to convey but in short, it was when people started using more powerful energy sources like coal to fire engines to do useful work for them, that they were able to actually take a break from the task of surviving and spending time doing other more creative things.

Ben, I'll read your post there, a few reflections though.

Indeed, it is quite remarkable what the powers of petroleum and other fossil fuels (FF's) has granted us. I would probably consider other alternatives than hyperinflation for the best case scenario looking into the most imminent future, my intuition is that it will not be allowed to happen and the 'real' energy consuming economic activity (mfg/trade/goods/services) will be continuously scaled back and replaced with virtual, digital, activity (finance/speculation/games/etc.) due to resource scarcity, EROEI and declining quality, such as those for FF's.

A friend of mine stated that he knew the oil "game" was up when shale and bitumen suddenly was considered tractable and extraction became possible by massive printing. I have to agree.

On a side note: Give me a bicycle, a bowl of rice or potato a day, a fast internet connection and I'm ready for the future.


Ben, I'll read your post there, a few reflections though.

On a side note: Give me a bicycle, a bowl of rice or potato a day, a fast internet connection and I'm ready for the future.

Thank you! Some more thoughts for your thoughts...

My better-half and I asked what would be the effect of a an EMP over N. Korea and the US at the same time.

Americans would reach for there smart thingies and be frustrated that it would not come on and/or they could not a get a connection so that they could search on "what to do in an EMP."

N. Koreans would go "What EMP? and go on with their lives.

I have researched spuds and it looks like I need 1/4 acre of potatoes for one person for a year. Now consider I can not stand guard and tend fields at the same time and I have to sleep sometime... I think I will need about 32 people that can contribute... do the math.... 8 acres of potatoes and hope I can store them and I am not hit by a blight.

But that happens after the harvest and if the first year I do not get it right... how many man-years of food is required to get to the first spud?

It would probably require more than a single EMP nuke to shut the whole shebang down I guess?

Back in my days of elementary school (80's) we'd get days off for the potato harvest in the rural areas of Sweden ("potatislov" in Swedish).

What? Days off school for Potatoes? As an Irishman, I'm jealous.